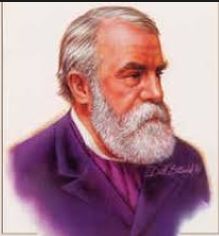 The Life of D.L. Moody

This is a 48 chapter biography of the famous Congregational Preacher, D.L. Moody by his son William. It covers the events of his life.

Other Works by Moody or About Moody

This may well be the most famous biography of any Christian leader in any generation.

It is fitting that Bible Support would be the one to bring back for the multitudes of Bible-believing Christians the life of D. L. Moody, who won a million souls in America and England.

Of the twelve or fifteen biographies of Moody, this is the largest, the most colorful, the authentic, authorized biography, written soon after Mr. Moody’s death by his son, Wm. R. Moody.

Read it, preacher, and feel again the breath of Heaven on preaching! Read it, Christian, and see again how God can use a common, uneducated man, filled with the Spirit and wholly dedicated to soul winning! Read it, young people, and come to grips with the question: Will you wholly give yourself to stay with the inspired Bible, the virgin-born Saviour, the anointing Holy Spirit, as D. L. Moody did, and so serve God with all your hearts?

CHAPTER 4 IN BUSINESS IN CHICAGO

CHAPTER 8 THE CIVIL WAR AND THE CHRISTIAN COMMISSION

The growth of the “North Market Hall” — Organizing a union church — Extended activities — Faith in early conversions — “Then you must be D L. Moody” — Resenting an insult — Heartfelt confession — Prayer in a billiard hall — How to reach the poor — Ever ready to learn

Meeting of Mr. Moody and Mr. Sankey — Their first joint service — A week together in Chicago A permanent engagement — Association hints — Dealing with tramps

CHAPTER 15 THE CHICAGO FIRE AND ITS RESULTS

A preliminary visit — A wonderful experience in London — Prayer answered — Home again — Urgent invitations to work in England — Left Chicago with Mr. Sankey — A time of testing — Arrival in Liverpool — Startling news — The courage of faith — “Will be in York tonight” — Only moderate success — In the North of England — Rapidly-growing interests — Recollections of Rev. F. B. Meyer — Sunderland and Newcastle — Pressing for decision

CHAPTER 17 BIRTH OF THE “MOODY AND SANKEY HYMN BOOK”

Newcastle the birthplace — Scarcity of American hymns — Sacred songs and solos — How the royalties were used — Completing the church in Chicago — A new book for American use — The American royalties — “Singing up buildings at Northfield” — The statement of William E. Dodge — Opinion of an eminent lawyer — Experience of George C. Stebbins — A tribute from James McGranahan

CHAPTER 18 THE AWAKENING IN EDINBURGH

CHAPTER 19 IN GLASGOW AND THE SCOTTISH TOWNS

Preparatory services — Sympathy of Dr. Andrew A. Bonar — Mammoth gathering in the Botanical Gardens — In other Scottish centers — Forty years an invalid — How to meet the tempter — Henry Drummond — Summary of results by W. Robertson Nicoll

In Belfast — A general call to Christians — Hearty union of churches — Londonderry — Christian work in Dublin — In English towns — Testimonies from the ministry— A watch-night service — Estimate of Dr. W. R. Dale — Sermon from the four-leaved book — Appeal for Young Men’s Christian Associations

Reason for delayed visit to London — Use of printers’ ink — Great halls engaged — The great need of the metropolis — Influential helpers — Personal statement from Mr. Moody — Answering objections — His creed — Success from the first — A word of warning — Hand-to-hand work — Strange crowds — Opposition and misrepresentation — Caricatures of the press — Lord Chancellor Cairn’s sympathy — The tide turns — Endorsed by “The London Times” — A letter from the Archbishop of Canterbury — Typical meeting described — Mr. Moody’s regard for the Sabbath — Meeting with Mr. Gladstone — Charles H. Spurgeon

Mr. Moody’s influence with men of affairs — The campaign opened in Brooklyn — Influential endorsement — Supported by the press — Philadelphia — Old Pennsylvania Railroad Depot — Work among inebriates — The passing of the year — The venerable Dr. Plumer as instructor — Mr. Moody as an inquirer — New York — A strong committee — A remarkable Sunday morning service — The great evening throngs — A vivid portrayal — Estimates of the work — Thurlow Weed — Where are the converts today

Influence of his brother Samuel — Henry F. Durant and Wellesley College — Purchasing a school site — Dedication of East Hall — The plan of the schools — Study and recreation — Twentieth anniversary

CHAPTER 30 THE BIBLE INSTITUTE FOR HOME AND FOREIGN MISSIONS

CHAPTER 33 VISIT TO THE HOLY LAND

Kind invitations — Touching responses — Few real holidays — Final acceptance — With St. Paul in Rome — The Pope’s money not good in Rome — In the land of the Pharaohs — Off for Palestine — Carriage ride to Jerusalem — On holy ground — Preaching on Calvary — Hebron — Bethlehem — The Mount of Olives — Making friends with native children — Backsheesh — Easter in the Holy City — Return to Egypt, Italy, and England — Working while resting

CHAPTER 35 IN PERIL ON THE DEEP

CHAPTER 37 THE USE OF THE PRESS

Learning as well as teaching — Other men’s thoughts — The temperance problem — What can a layman do? — The “after-meeting” — The use of the stereopticon — “Would you advise one to go into the ministry?” — Elocution — Too many churches — How to reach strangers — Unconverted church members — How to reach young men — How to overcome nervousness — Aiming at the heart

Mr. Moody’s idea — Personal dealing — Authority from the Scriptures — No set rules — Peculiar cases — Not a confessional — Cautions and suggestions — How to become a worker in the inquiry room

CHAPTER 42 HIS BELIEF AND PRACTICE

Standing by the Book — A mutilated Bible — Christianity vs. infidelity — “I stand by Jonah” — No new remedy for sin — The Northfield platform — Mr. Moody’s church membership — A statement of the church’s position — Methods of work — Independent but devoted — Abnegation of self — The paramount object

A character that could bear rigid examination — “This one thing I do” — Consecrated common sense — Often standing alone — Modest simplicity — “I am a most overestimated man” — Abhorrence of show — A hero worshipper — Determination — Intense conviction — Avoidance of “lobbies” — Judging human nature — Firm friendships — Mr. Sankey’s tribute — Professor Towner’s personal testimony — Faithful in rebuke — Among his own townspeople — Bravery tested and not found wanting — Quick perception — Always himself — As a father confessor — A Chinese estimate

CHAPTER 44 IN THE HOME CIRCLE

CHAPTER 45 WITHIN THE GATES

“Were you ever homesick for Heaven?” — Tribute to his mother — “Comforted to comfort” — Kansas City — Great gatherings — The collapse of strength — Letter to a dear friend — His last sermon — A prophecy — The last plea — The homeward journey — Messages by the way — Back in Northfield — Days of anxiety — “Ready for either” — Last messages — “Within the portals of Heaven” — Death is not hard — No valley here — Thinking of others to the last — Conscious to the end — An abundant entrance — His own testimony

CHAPTER 46 AT REST ON ROUND TOP