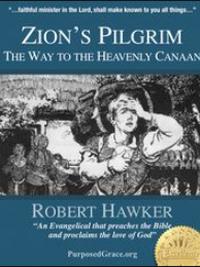 Hawker Robert Zion’s Pilgrim is a devotional type work about the Christian’s walk and life.

It was not until that I had passed a very considerable portion of time life, that I felt the full conviction of my being but “a stranger and a pilgrim upon the earth”-and it becomes even now, one of the most astonishing circumstances, in the new view of things which are continually opening before me, that there should have been so much ignorance in my mind by nature, on a subject which in itself appears so exceedingly plain and evident. Not that I was altogether void of apprehension, that the present life formed a bounded prospect; but yet my ideas were like those of the great mass of unawakened characters, who believe as though they believed not; and who, though ready enough to confess in the general, that man is but a dying creature, yet, in the particular instance, as it concerns themselves, live as though they never thought to die. I pause-in the moment of recollection, to look back upon the whirlpool, in which for so many years I was hurried on by the unceasing current! unconscious of the perilous situation in which I then moved, and unconcerned at what I saw of the sudden departure of those around me, swallowed up in the vortex!

“They shall ask the way to Zion with their faces turned towards it, saying, Come let us join ourselves to the Lord in a perpetual covenant that shall not be forgotten.” Jeremiah 50:5

“And confessed that they were strangers and pilgrims on the earth.” Hebrews 11:13

Hawker Robert Zion's Pilgrim is a devotional type work about the Christian's walk and life.