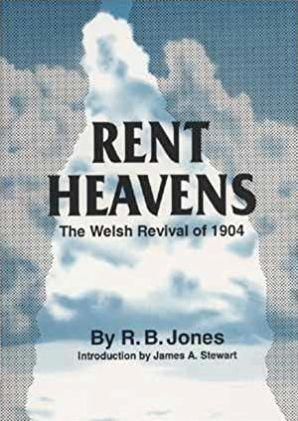 In this 7 chapter work, Jones (Baptist) examines the revivals of 1904 (The Welsh Revival). His chapters are the Name, origins, November 1904 the Double Outburst, the revival meetings, immediate Practical Results, lasting Fruit, And addenda.

Some of its Hidden Springs And Prominent Results

South Wales Bible Training Institute, Porth
This book is being reprinted by special request.
All profits from the sale of the book are being allocated to the support of the Pioneer Mission Orphanage at Paimpol, Brittany under the supervision of the Rev. Caradoc Jones.

I AM glad that a new edition is being issued of Mr. Jones’ valuable book, in which an event is described which illustrates in a wonderful way the power of God, exerted in answer to prayer, and producing moral and spiritual changes such as we long to see to-day.

Having been in Wales at the time of the Revival, I appreciate the unstrained and life-like account which the author gives of those remarkable scenes.

I was in Loughor, the home-village of Evan Roberts, in the last week of 1904. There in the midst of his own people was the young student whom God had called to be the standard­-bearer of the Revival movement. The chapel was thronged, the atmosphere tense. Evan Roberts spoke only a few words, but they were wise and gracious words and clothed with power. It did not seem as though the meeting depended on the human leader. There was guidance, but it was from the Unseen, as prayer followed prayer, and bursts of song expressed the joy of souls in fellowship with God.

At a later meeting that week the scene was a large chapel in Clydach. The night was rainy and the roads muddy, but the place was packed; the only vacant place being in the pulpit. That night there was no visible leader. Yet the service went on for hours, with hymn, prayer, Scripture reading, testimony, following one another without a break. There was intense pleading with God for souls, and now and then a burst of praise as one and another yielded to the Gospel appeal.

The impression during that week was of the unique impor­tance of the spiritual world. The things of earth seemed petty in comparison with the things of Heaven. There was war in the East then, but it appeared small beside the spiritual war in which we were witnessing the victories of God. Christ, we felt, was in the midst, and His people, radiant and joyous, were transfigured with celestial light. This made an impression upon the people outside, and they flocked to the gatherings, neglect­ing politics and the football field and finding in innumerable cases, the secret of a new life.

The picture of the Revival given by Mr. Jones will surely quicken the desire for such a blessing in our own day and will point the way of prayer by which preparation for such an event is made.

THE following is not an attempt at writing the full story of what is commonly called “The Welsh Revival”. That story-not yet written,* perhaps, never to be written–must, if written at all, be left to a more qualified pen. The present writer, although, in the grace of God, intimately connected with that work, must, by reason both of capacity and oppor­tunity (or rather, lack of both) content himself with something more modest. To quote the late Mrs. Penn-Lewis, “The very most that has been (or can be) said and written can only be glimpses after all, and glimpses too of that which has come within the ken of a finite human being. God alone can unfold what He has done in this day of His power.”

The pages that follow are written in realization of a long­-cherished desire, and also at the present urging of friends who believe that they may help in deepening the longing for another great visitation of God, and also encourage and guide prayer therefor. They are written also because there are facts regarding the origin of the Revival which hitherto have not been published, facts known to but a few. It ought also to be said that the writer has not had his own people in view so much as those outside the Principality to whom the Revival was a matter not of experience but of repute.

The present time seems opportune for recalling the mighty days of a quarter of a century ago, for, thank God, there are not lacking some slight signs of preparation for another visitation of a similar nature, and, let us trust, of universal scope. The writer prays that his little effort may indicate more especially the conditions leading to Revival and also some of its lasting results.

* All that have been written, so far as the writer is aware, are the following: Evan Roberts, Rev. D. M. Phillips, M.A., Ph.D.; The Awakening in Wales, Mrs. Penn-Lewis; With Christ Among the Miners, Rev. H. Elvet Lewis, M.A.; The Revival in .the West, W. T. Stead; Y Diwygiad a’r Diwygwyr; and some smaller booklets.

In this 7 chapter work, Jones (Baptist) examines the revivals of 1904 (The Welsh Revival). His chapters are the Name, origins, november 1904 the Double Outburst, the revival meetings, immediate Practical Results, lasting Fruit, And addenda.