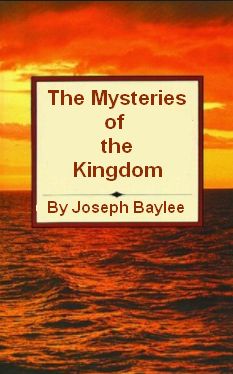 The Mysteries of the Kingdom (Parables)

A SERIES OF EXPOSITORY SKETCHES  OF OUR BLESSED SAVIOUR’S PARABLES.

This is a series of 12 chapters on the Kingdom Parables.

Chapter Content of The Mysteries of the Kingdom (Parables)

Baylee received his education at Trinity College, Dublin (B.A. 1834, M.A. 1848, B.D. and D.D. 1852). To the residents of Liverpool and Birkenhead his name became for a quarter of a century a household word, on account of his activity as the founder and first principal of St. Aidan’s Theological College, Birkenhead, where he prepared many students for the work of the ministry. This institution, which may be said to have been founded in 1846, originated in a private theological class conducted by Dr. Baylee, under the sanction of the Bishop of Chester, Dr. Sumner, afterwards advanced to the see of Canterbury.

Dr. Baylee’s successful exertions changed it into a public institution, and led to the construction of the present college building, which was opened in 1856. At one time Dr. Baylee was well known as a champion of the evangelical party, and especially for his theological discussions with members of the Roman Catholic church. Accounts were published of his controversies with Thomas Joseph Brown, bishop of Apollonia (afterwards of Newport and Menevia), on the infallibility of the church of Rome (1852), with Matthew Bridges on Protestantism v.. Catholicism (1856), and with Edward Miall, M.P., on Church establishments.

In 1871 Dr. Baylee was presented to the vicarage of Shepscombe, Gloucestershire, where he died 7 July 1883.

2 thoughts on “Baylee – The Mysteries of the Kingdom (Parables)”