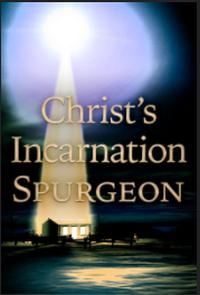 CONTENTS of Spurgeon, C.H. – Christ’s Incarnation the Foundation of Christianity

THE ANGELS’ SONG, ITS OPENING NOTE
THE ADDED STANZA
ITS FINAL NOTE
THE NAME OF JESUS, GOD GIVEN
PRIZED BY HIS PEOPLE
COMMON, YET UNIQUE
INDICATES HIS WORK
CHRIST’S INCARNATION, AT THE RIGHT TIME
A QUIETUS TO FEAR
JOYOUS AND PERSONAL
THE WONDER OF ANGELS
THE MARVEL OF MORTALS
EMMANUEL, “GOD WITH US”
“GOD WITH US,” UNPARALLELED CONDESCENSION
THE MYSTERY OF MYSTERIES
BRIDGING THE GREAT GULF
UNDER ALL CONDITIONS
THE GOD MAN, CHRIST JESUS
A MIRACLE OF POWER AND LOVE
ALL FULLNESS IN THE GOD MAN
CHRIST INCARNATE, HIS KNOWLEDGE OF SIN
THE SINNER’S ONLY HOPE
THE PLEDGE OF DELIVERANCE
THE INCARNATION, THE HEART OF THE GOSPEL
THE INCARNATION, AND OUR SONSHIP
THE INCARNATION, ITS GLORY
THE WISE MEN AND THE INCARNATION
WHAT THEY TEACH US
THE INCARNATION, THE CAUSE OF TROUBLE
ALSO A SOURCE OF JOY
ACCORDING TO PROPHECY
CHRIST’S POVERTY, OUR RICHES
BODY DIVINELY PREPARED
JESUS CHRIST, HIS OWN HERALD
“FULL OF GRACE AND TRUTH”
CHRIST’S FULLNESS RECEIVED BY HIS PEOPLE
ROOM FOR CHRIST JESUS
CHRIST’S TWO APPEARINGS