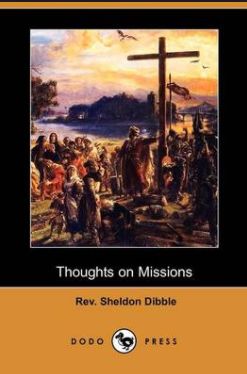 Thoughts on Missions
by Sheldon Dibble
Missionary in the Sandwich Islands.

Published in 1844 by the American Tract Society, 150 Nassau-Street, New-York.

n this 8  chapter work, Dibble (Presbyterian, Missionary) presents us with thoughts on missions (also this work in title “A Voice from Abroad”). His chapters are the true spirit of missions, Christian stewardship, guilt of neglecting the Heathen, the Saviour’s last command, laymen called to the field of missions, claims of missions on ministers of influence, the import of the great commission, and trials to be met.

CONTENTS of Thoughts on Missions

CHAPTER I. THE TRUE SPIRIT OF MISSIONS. PAGE.

Lowliness and condescension, like our Saviour’s, essential to missionary character, 18

The true Missionary is ready, like Christ, to endure suffering for the good of others, 21

The true Missionary, like his Master, waits not to be urged and entreated, 24

The true Missionary, like the Saviour, feels no less compassion and love to the heathen on account of their ingratitude and enmity towards him, 26

All we have belongs to God, 32

To occupy all our powers for God, we must equal the engagedness and enterprise of worldly men, 34

How much faithful stewards may consume on themselves and children, 40

The best use of a large capital, 46

Money not the main thing needed, 50

The luxury and honor of being God’s stewards, 56

Prospects of the heathen for eternity, 64

Peculiar advantages of the American churches to carry abroad the Gospel of Christ, 69

Do we pray for the heathen as much as we ought? 73

Do we give as much as we ought to evangelize the heathen? 75

Do we go and instruct the heathen as we ought? 81

Why are the heathen lost? 85

Excuses of Christians for not doing more to evangelize the heathen, 102

CHAPTER V. LAYMEN CALLED TO THE FIELD OF MISSIONS.

Labors of the first disciples, dispersed from Jerusalem by persecution, 111

To elevate all nations requires a great variety of laborers, 116

Reasons why laymen should engage in the work of Missions, 130

CHAPTER VI. CLAIMS OF MISSIONS ON MINISTERS OF INFLUENCE.

Separation of Barnabas and Saul for the Missionary work, 134

The present distribution of ministers anti-apostolic, 141

Insufficient excuses of pastors for remaining at home, 147

Other excuses of pastors that have weight, but are not sufficient, 155

Necessity that some pastors of influence and talent should become Missionaries, 161

Some excuses common to pastors and to candidates for the ministry, 169

Responsibility not peculiar to Missionaries, 178

The fallacy of endeavoring to convert the world by proxy, 181

No cheap or easy way of converting the world, 191

Some rules that may be of use in agitating the question of becoming Missionaries, 194

CHAPTER VIII. TRIALS TO BE MET.

Difficulties in the way of training children on heathen ground, 201

Reasons in the minds of Missionaries for not sending their children home, 210

Other thoughts about Missionaries’ children, 218

Entire consecration of children, not a duty peculiar to Missionaries, 222