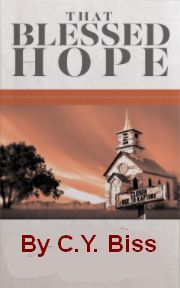 In this 4 chapter work by Biss (Baptist Missionary) he looks at four aspects of the second coming of our Lord.

Table of Contents of That Blessed Hope

Chapter 1: The Second Coming of the Lord Jesus Christ
Chapter 2: Watchful Expectancy of the Lord’s Return—Its Nature and Effects
Chapter 3: The True Believer Acknowledged and the False Professor Disowned at the Coming of the Lord
Chapter 4: The Body of Humiliation and the Body of Glory
Biography

Nearly one hundred years ago, on 20th January, 1912, Dr Cecil Yates Biss was called home. Dr Biss, a well known and much loved Christian worker was born at Calcutta in 1845, the son of godly parents, who were Strict Baptists. His grandfather was one of the first Baptist missionaries in India, and a friend of William Carey. At an early age Mr Biss went to New Zealand to join an elder brother already there; and, after a hard struggle, in the course of which he encountered many vicissitudes, [changes of circumstances affecting his life] he obtained an appointment in the Civil Service, at Wellington.

His appointment took him later to Dunedin, where he was married to Janet Jones; and, after the birth of their first son, he came to England in 1871. Mr Biss became a scholar of Downing College, Cambridge, obtaining a first class in the Natural Science Tripos of 1875, and being appointed a Foundation Scholar as well as Winchester Prizeman. He took his B.A. degree in 1875; and was in the first class in the M.B. examination of 1880. In the same year he became a member of the Royal College of Surgeons, while he took his M.D. at Cambridge in 1884, and became a Fellow of the Royal College of Physicians in 1889.

His medical training was received at St. Bartholomew’s Hospital. In addition to filling important public appointments and professional engagements, he was, till his final illness in 1899, physician to the Friedenheim Home for the Dying, and consulting medical officer to the Baptist Missionary Society.

He had his own consulting practice in Harley Street, and was much loved and respected by all who profited by his careful advice and well considered opinions. There are many who, under God, owed their life and health to consultation with him, especially those suffering from pulmonary complaints. He was among the earliest English physicians to adopt the open air treatment for consumptive patients, if not the first to do so.

In New Zealand, while still a young man, not eighteen, Mr Biss began his work for God. He could never name the date of his conversion, but the work of the Spirit began in his heart when very young; and, having ‘from a child known the Holy Scriptures,’ he became through them ‘wise unto salvation.’ He first preached in the open air and in halls, and visited in sick rooms and hospital wards.

His remarkable power as a preacher and exponent of the Word was recognized wherever he spoke, while his striking personality made him a power for good to all with whom he came into contact. When, on leaving Cambridge, he settled at Sydenham, he began, while busily engaged in his medical profession, a work at Wells Hall, which went on for some seven years. Preaching twice on Sundays, and on one evening in the week, he soon drew a congregation of those who loved and valued the Word as taught in its power and purity. The chief characteristic of his ministry was the gifted way in which he opened up the Scripture – not isolated passages, but whole portions or Books, going consecutively through whatever he began, word by word. As an illustration of this, it may be mentioned that, in 1898, he preached thirty eight sermons on the Epistle to the Colossians.

His teaching was varied and most interesting. The subjects chosen were doctrinal, practical, and prophetical; but whatever he taught, it was with a power, a grace, a reality which could not fail to impress, to arrest attention, or to lead to thought.

His doctrinal teaching was always on the old Evangelical lines of the Puritan writings and Calvinistic theology; and his prophetic addresses on the futurist lines followed by Mr Benjamin Wills Newton. Some of his sermons were printed for circulation, after careful revision. One volume, entitled ‘Expository Addresses on Scriptural Subjects’ deals with such topics as ‘Martha and Mary,’ ‘The Second Coming,’ ‘The Things Contained in the Ark of the Covenant,’ and ‘Worship.’ Another is entitled ‘Studies in the Book of Judges.’

He was a gifted hymn writer, and composed many tunes which were published under the title, ‘Selected Hymns with Original Tunes.’

In 1884 Dr Biss moved to Harley Street on account of his growing medical work, and then for some time he spoke on the Lord’s Days in Portman Rooms. Afterwards, he engaged a room in Cochrane Street, St. John’s Wood, and in 1892 he transferred the services to CarIton Hill Chapel, where he ministered till his illness in 1899.

As the chapel had formerly been a Reformed Church of England, it was necessary to form a baptistery, as Dr Biss maintained the teaching and practice of the baptism of believers by immersion. The Lord’s Table was spread for believers every Sunday. The ministry of Dr Biss was independent of any organization. He kept to the ,old truths, and never identified hirnself with any denomination.

Those who were aware of his numerous professional and religious engagements knew that a great strain was put on the constitution of even so fine a frame as his.

In 1899, while at the bedside of a patient, he was seized with acute pain, which proved to mark the beginning of paralysis agitans. For some months previously he had felt that his right arm and hand were failing, and had begun to teach himself to write with his left, which he learned to do almost as clearly as he had done formerly with the right, and continued doing so till the left arm also failed – some two years after. After the attack referred to, he was never able to minister again in public, though twice he presided at the Lord’s Table, and for some three years dictated addresses which were type-written and used for his former congregation.

The last of these sermons – on the ninth chapter of Numbers was preached at CarIton Hill, March 5th 1899. He had been going through the Book of Numbers for several Sundays, and had then reached the ‘pillar of fire and cloud.’ After speaking of the guidance of the cloud, and how impatient, no doubt, Israel often was of long abiding in one place, he showed that God still tests His people thus, till they are ready to cry out that there is no answer to their prayers, no token of His presence. He went on: ‘Poor Heart, Trust Ort! Thou sayest: ‘Lord, make haste to help me;’ and there is no evidence of haste. ‘Why tarriest Thou?’ That patience may have her perfect work in thy soul, not merely that there may be patience, but that it have its perfect work. Trust on ‑ do not be impatient! In that day, when we see how God has fulfilled all His Word, and how the only failure has been that which has come in through our want of trustfulness; when we look back and ‘know as we were known,’ and understand that at every point of our road the pillar was in front of us guiding and protecting, we shall say: ‘Oh, how I wish I had known it!’ When we stand in Canaan land, with every wish gratified, every longing satisfied, and every one of the desert tears wiped away, we shall say: ‘God was true, and I only wish I had trusted Him fully.’

These closing words of a thirty five years’ ministry seem almost prophetic of the stroke which four days afterwards left his congregation without a leader, and of his own tried path for the rest of his life. And truly during those thirteen years of suffering and enfeebled powers that followed when one faculty after another failed him, and when for the last eight years he lost all possibility of movement which could avail for reading and writing – also becoming speechless for the last four – he fully carried out his own teaching. He lost his wife four years before his death, and two sons – one before and one after her – during his illness; yet, under all these afflictions, never was a word of murmuring, or an expression of a doubt of God’s goodness, heard from him, never a questioning of the wisdom and kindness of the Lord.

His patient life was always characterized by a deeply humble estimate of himself, a keen sense of sinfulness, and a lowly retrospect of past service. In the end, God’s Word was almost hourly his friend and teacher; and the lesson to those who saw him, of endurance and even praisefulness, under such trials, has been unique and most wonderful. He was laid to rest in Hampstead Cemetery, with his wife; and the great regard in which he was held was shown by the large gathering from all parts of England of those who had known and loved him and his ministry, proving that although he had been unseen by most for thirteen years, his ‘memory was blessed.’

Chapter 1: The Second Coming of the Lord Jesus Christ
Chapter 2: Watchful Expectancy of the Lord’s Return—Its Nature and Effects
Chapter 3: The True Believer Acknowledged and the False Professor Disowned at the Coming of the Lord
Chapter 4: The Body of Humiliation and the Body of Glory
Biography