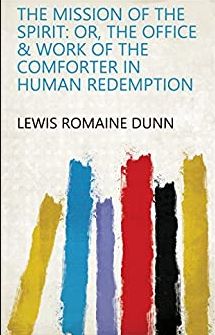 Methodist Dunn’s Mission of the Spirit is a work on the Office and work of the Holy Spirit in Redemption. 19 chapters. 1872

The mission of the spirit: or,
The office & work of the comforter in human redemption…
By Lewis Romaine Dunn

THE MISSION OF THE SPIRIT; OR, THE OFFICE AND WORK OF THE COMFORTER IN HUMAN REDEMPTION. By R EV. L. R. DUNN.’

Entered according to Act of Congress, in the year 1871, by CARLTON & LANAHAN, in the Office of the Librarian of Congress at Washington.

CONTENTS of Mission of the Spirit

The following translation of this inimitable hymn is from the chaste and elegant pen of Dr. Abraham Coles of Newark, N. J.

I.
Come, O Holy Spirit, come,
And from Thy celestial home
Of Thy light a ray impart!
Come Thou, Father of the poor!
Come Thou, giver of heaven’s store!
Come Thou, light of every heart!

II.
Promised Comforter, and best,
Of the soul the dearest Guest,
Sweet Refreshment here below,
Rest, in labor, to the feet,
Coolness in the scorching heat,
Solace in the time of woe.

III.
O most blessed Light! the heart’s
Innermost, most hidden parts
Of Thy faithful people, fill!
Not without Thy favor can
Anything be good in man,
Anything that is not ill.

IV.
What is sordid make Thou clean;
What is dry make moist and green;
What is wounded heal for aye.
Bend what’s rigid to Thy will;
Warm Thou whatsoe’er is chill;
Guide what’s devious and astray.

V.
To thy faithful given be
Those confiding still in Thee
Graciously the holy seven;
Give Thou virtue’s recompense,
Give a safe departure hence,
Give the eternal joy of heaven.

THIS is the dispensation of the Spirit. We are living in the very midst of its culminating glories. The rushing fires of another Pentecost are coming upon the Church now as they have not during the centuries preceding the one in which we live. All eyes are lifted expectant to the everlasting hills, where intercedes a glorified and exalted Christ. Or ever his triumphal chariot had wheeled upward to the gates of pearl, he left his promise and his pledge to the Church of the wonderful gift of the Comforter. That promise and that pledge have only been fulfilled in part-in individual instances and in certain localities. The Church, overrun with worldliness and beclouded by unbelief, has been comparatively powerless for the want of the full baptism of the Comforter. And the world, this poor, lost, fallen world, still remains unransomed from its sins and their consequences. The great work of preparation for its
4 complete redemption seems, however, well-nigh finished. The mountains have been leveled, and the valleys upreared; the crooked places have been straightened, and the rough places smoothened, and the time for ” all flesh to see the salvation of our God” is at hand.

What is now wanted is a universal Pentecost, not only that all the babbling millions of earth may hear of “the wonderful works of God” in their ” own tongue wherein they were born,” but that they may be ” pricked to the heart” by the arrows of the convincing Spirit, and be saved by his power.

It is a somewhat remarkable fact that, with all the teachings of the Divine Head in reference to the Comforter, with all the luminous promises of his gifts and grace, so little, comparatively, has been written concerning him. The world is full of books about Christ, and the number of them is constantly increasing; but we can almost count on our finger ends the books written specifically about the Holy Ghost. And yet his sovereign agency in the completion and consummation of redemption’s work is constantly acknowledged in the word of God. Why this is so, that so little has been written, awe can
5 scarcely tell; and yet, because it is so, there is much of ignorance, doubt, and unbelief in the Church as to his work and his power. Many huge volumes of theology devote only a few pages to the consideration of his Godhead, his offices, and his work. There is now and then a sermon preached upon these all-important themes; but too seldom are they introduced into the sacred desk.

The author of this book has long felt that a treatise bearing directly upon these questions is a desideratuim in the literature of the Christian Church. In conversation with several leading divines in his own and other denominations, he has found that they entertained the same views and feelings, and he has been encouraged by their advice to proceed with the preparation of this volume. How successful he may have been in the performance of his work the reader will judge. Due acknowledgment has been made of the authors from whose works quotations have been made, in foot-notes, and therefore no mention of their names is needed here.

The author fully believes that the coming and the crowning conflict of the Church will be about the truths dwelt upon in this volume.

6 Indeed, there is, even now, “skirmishing all along the line.” The great aim of modern infidelity is to ignore all spiritual agencies; to banish God from the world; to deny all miraculous agency and all moral regeneration; to proclaim a cold, dull, dead materialism; and to bind the universe in the chains of fixed, irreversible and inviolable law. If the writer has made it to appear that there is not only a supernatural and superhuman, but a Divine Agency, working out great spiritual results, and effecting great moral regenerations-an agent who, because he is God, is capable of bringing about the complete transformation and revivification of a fallen and dead humanity, and who is able and willing and ready to do this work now-he will be glad that he has contributed something that will serve to call attention to the ever-blessed Comforter. Bespeaking the indulgence of the critical reader, and beseeching the earnest, prayerful reading of this book by all classes of the ministry and laity of the evangelical Churches, the author sends forth this volume with many prayers that all may find a ” blessing in it.”