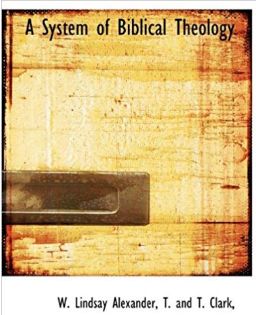 A System of Biblical Theology

in November 1834 to become minister of North College Street church ( Argyle Square), an independent church which had arisen in 1802 out of the evangelical movement associated with the Haldane brothers, Robert and James. .org

CHAPTER I. CREATION OF MAN 1
CHAPTER II THE CONSTITUTION OF MAN. 9
1. refer to the natural constitution of man as God’s creature. 10
2. Soul and spirit are used as a parallel with each other. 12
CHAPTER III PRIMITIVE MAN. 18
CHAPTER IV PROBATION, TEMPTATION, AND FALL OF MAN. 22
The Temptation. 27
The Fall 31
CHAPTER V THE UNIVERSALITY OF SIN 32
1. The Testimony of Scripture. 32
2. The Testimony of Human Life. 39
CHAPTER VI EVIL THE ORIGIN OF EVIL. 46
1. Definitions of Evil. 47
2. The Origin of Evil. 51
CHAPTER VII THE NATURE OF SIN. 59
1. The General Testimony of Scripture concerning Sin. 64
CHAPTER VIII THE PRINCIPLE OF SIX. 68
1. The Psychological Law of Man’s acting. 70
2. The Principle of Moral Goodness. 71
3. The Principle of Sin. 80
CHAPTER IX KINDS OF SIN. 84
1. In respect of the law of which they are a transgression 85
2. In respect of the compass of the act itself, there are 85
3. In respect of the party charged with them, there are 86
CHAPTER X THE SOURCE OF SIN. 88
1. General Considerations. 89
2. Tlie Testimony of Scripture. 89
3. Tlic Connection of Adams Sin with that of the Race. 92
CHAPTER XI CONSEQUENCES OF SIN. 118
1. The Consequences of Sin to Man himself. 120
2. Consequences of Sin to the World. 130