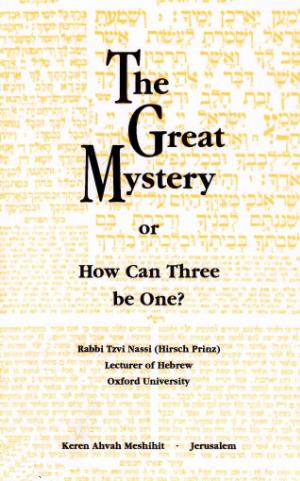 Nazzi Plurality in the Godhead, or How can three be one? is a work by a Jewish rabbi on the Trinity, on the plurality of God within the Godhead.

Plurality in the Godhead
or How Can Three Be One?

Rabbi Tzvi Nassi (CWH Pauli)
(1863)
How can they (the Three) be One? Are they verily One, because we call them One? How Three can be One, can only be known through the revelation of the Holy Spirit (Zohar II 43b)

Contents of Nassi Plurality in the Godhead

Part 1
1. Nathanael gives an account of himself.
2. The effect of Divine life in the soul.
3. Nathanael explains the plan of enquiry which he pursued.
4. Nathanael gives us a sketch of the lives of these Jewish-Church fathers.
5. A grammatical axiom in the Hebrew language.
6. Logical agreement between the subject and the predicate, or between the noun and verb.

Part 3 – Third Division
1. Nathanael discovers that the WORD of the Lord is not only called the ANGEL of the Covenant, but also the Metatron.
2. Signification of the Name, Metatron.
3. No one, not even Moses, has ever seen God, but he saw the Metatron, who appeared unto him.
4. Metatron, the first-begotten of God.
5. Metatron, highly exalted.
6. Metatron is the only mediator between God and man.—
7. The Almighty has revealed Himself in no other than in the Metatron, the KEEPER of Israel.—
8. Metatron is called the Son of God.

Part 3 – Fourth Division
1. The Middle Pillar in the Godhead, has revealed Himself as the Son of God.—
2. Nathanael is instructed that the Son of God is from eternity, an emanation from God, therefore called Jehovah (Yud Hei Vav Hei).
3. The Son of God, the Fountain of Light, Begotten from Eternity.
4. My Ancestors’ triumphing faith in the Son of God.
5. R. Simeon ben Jochai’s prayer and exhortation.

He was born as the youngest of six children, and orphaned at 14.[3] Although he is referred to as “Rabbi Tzvi Nassi” in some Messianic Jewish reprints of his proof of the Trinity from the Zohar, there is no indication that he was ever a rabbi. At the age of 21 he published in German, under the name Heinrich Prinz Sermons for pious Israelites.[4] He was converted by L. A. Petri.[5]

In England as Rev. Christian William Henry Pauli he became a missionary for the London Society for promoting Christianity among the Jews of Joseph Frey, first in Berlin, then at Amsterdam.[6] In 1839 as C. W. H. Pauli he published Analecta Hebraica, a Hebrew grammar.[7] While many have attempted to discredit the claim that Pauli was a lecturer in Hebrew at Oxford University, research demonstrates that he was.[8]

1824 Heinrich Prinz Predigten für fromme Israeliten zur Erbauung und zur wahren Aufklärung in Sachen Gottes. in Jahrbücher der Theologie und theologischer Nachrichten, Volume 2 Friedrich Heinrich Christian Schwarz
1839 Christian William Henry Pauli Analecta Hebraica Oxford 1839
1871 The Chaldee Paraphrase on the Prophet Isaiah of Jonathan ben Uzziel translated by C.W.H. Pauli. – Targum Isaiah.
1863 The Great Mystery, or How can Three be One (London, 1863) – an endeavour to prove the doctrine of the Trinity from the Zohar, in which he made further critical comments against Gesenius including that he had misunderstood the grammar and perpetuated a hoax concerning the pluralis excellentiae of Elohim.[14]

More Works on the Trinity