A History of American Christianity 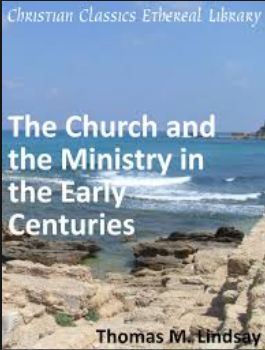 Church and the Ministry in the Early Centuries

Church and the Ministry in the Early Centuries
By Thomas M. Lindsay

Scholars can only reconstruct what the lives of the first Christians were like with the limited evidence available to them. In 1902, this Scottish theologian set out to do just that, and published a series of lectures he had given on the subject. Drawing from biblical and other ancient texts, Lindsay paints a picture of first century churches, their leaders, and their missionaries. In particular, he traces the development of the ministry itself and how it evolved into the priesthood of the Catholic Church. As well as investigating how Roman religious customs influenced the early Church’s hierarchy, he briefly sketches some of the first Christian controversies concerning the roles of church leaders.

Church and the ministry in the Early Centuries is about the church in the early centuries.

Lindsay-The Church And The Ministry In The Early Centuries
Lindsay-Thomas-M-The-Church-and-the-Ministry-in-the-Early-Centuries.topx
Version: 1

Title Page.
Preface.
Extract Declaration of Trust.
Chapter I. The New Testament Conception of the Church.
Chapter II. A Christian Church in Apostolic Times.
Chapter III. The Prophetic Ministry.
Chapter IV. The Churches Creating Their Ministry.
Chapter V. The Ministry in the Second Century.
Chapter VI. The Fall of the Prophetic Ministry and the Conservative Revolt.
Chapter VII. Ministry Changing to Priesthood.
Chapter VIII. The Roman State Religion and Its Effects on the Organization of the Church.
Appendix. Sketch of the History of Modern Controversy About the Office-bearers in the Primitive Christian Churches.

This module on Ancient church history is a simple history of the Christian church.Ayer, Joseph C. – A Source Book for Ancient Church History

This module on Ancient church history is a simple history of the Christian church.

This module on Ancient church history is a simple history of the Christian church.